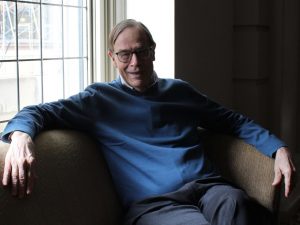 If asked to name the American thinkers of the past 150 years whom I most admire, I would place the great pragmatic philosopher William James at the very top of the list. Starting as a professor of physiology at Harvard in 1873, James virtually created psychology as an academic discipline. His Varieties of Religious Experience, published in 1890, endures as a religious classic.

William R. Miller, distinguished professor emeritus of psychology and psychiatry at the University of New Mexico, should be considered among James’ most worthy successors. While he may not have created an academic discipline, Miller did, along with colleague Stephen Rollnick, develop a new therapeutic technique – Motivational Interviewing (MI) – now used worldwide to treat individuals suffering from alcoholism and addiction and more broadly seeking personal change.

It is easy to forget that until about 40 years ago, many people believed a confrontational “boot-camp” approach was an effective treatment for alcoholism and other addictions, The concepts of MI have helped to expose this misguided view.

Miller’s experience in working with addicts also led him to explore with academic rigor the notion of sudden personal conversion. He is the first scholar since William James to do so. In his book Quantum Change, he documents what he finds to be the reality and surprising frequency of such experiences. He is now exploring the ways MI and such “change” experiences might be related.

On the origins and key tenets of Motivational Interviewing:

Early in my education, I was on an internship in Milwaukee, Wisconsin working on an alcoholism unit. It was run by a psychologist who was compassionate and scientifically oriented, so I felt very at home. I knew nothing about alcoholism, really, but had been trained in Carl Rogers’ person-centered and behavioral approaches.

It was the patients who taught me about alcoholism. I began reading the literature on alcoholism from the 1970s, which said, “Alcoholics are pathological liars, completely in denial, out of touch with reality, and horribly difficult and defensive.” And I said, “Gee, those aren’t the same people I was talking to.”

This puzzle was the beginning of Motivational Interviewing. I realized that that picture of people being very difficult, defensive, and dishonest was a function of the way we were treating addiction at that time — in a very confrontational, authoritarian, shut-up-and-listen kind of way.

The spirit behind Motivational Interviewing is partnership rather than “I’m the expert and you’re only a recipient.” It’s two people talking to each other as peers. I have expertise, but so does my client. My client knows more about him- or herself than anybody else in the world. If we’re talking about a change in that person’s behavior, I need their expertise, as well as my own.

A central principle is that it should be the person, the client, the patient, the student, who’s making the arguments for change and not me. If I’m arguing for change and they’re arguing against change, I’m in the wrong chair.

On the importance of “self-acceptance” in personal change:

Here was one of Carl Rogers’ interesting discoveries: that when you experience yourself as unacceptable, it’s very, very difficult to change. It’s paralyzing. And when you experience acceptance, profound acceptance — as you are — whether from a therapist, or a friend, or your family, or God, then it becomes possible to change.  Now, I don’t know why we’re wired that way, but we seem to be.

On the role confrontation and punishment in response to addictions:

Human beings don’t generally take well to being told what’s wrong with them and what they should do. If you take a different, person-centered approach, you get a very different outcome. You find that you are working with a very different kind of person.

When we also looked at the literature on confrontation, it is completely negative. There’s not a single clinical trial of a confrontational approach that produced a positive outcome. It was the norm at that time. We thought that that’s what those people needed.  But there never was any science to the notion that if you can just make people feel bad enough, they’ll change. And nor is that my faith.

On the debate over addiction as a disease or a choice:

It’s an old idea that people with substance use disorders just can’t enter into a therapeutic relationship. There never was any science to that. Quite to the contrary, person-centered approaches like Motivational Interviewing have a very, very good track record.

When we have this black-and-white way of thinking about things, there are only two possible outcomes, perfection or disaster. I’ve done outcome research for 40 years. Outcomes don’t look like that. They’re all over the map. It used to be alcohol dependence and alcohol abuse were different disorders. They’re not. It all lies along a continuum. Outcomes look the same way.

What is meant by the disease model is that you are completely different, incapable of controlling what you are doing.  For some people that’s helpful.  Identifying with that is the way they stay sober, and that’s good. However, if you don’t remain perfect, it can be discouraging.

We have a study in which we found that an endorsement of the disease model actually increases the relapse rate. People were more likely to not just use, but use catastrophically, when they believe that if one drinks one is a drunk. For some people, that’s helpful. For others, it’s not. That’s human nature and there’s not one solution, one answer for everybody.

On how churches and other communities can respond to addiction:

First, make it a topic of conversation. So often there’s so much shame around this topic in the United States that you just don’t talk about it. You can change that norm in a church by preaching about it if you’re the pastor, by sharing stories in prayer time.  Bring it out of the closet. In this country we have made it a shameful thing.

Albuquerque is an interesting example. The University of New Mexico Hospital operates the largest addiction treatment program in the state. But it’s not located at the University of New Mexico Hospital. It’s in a warehouse district out by the airport. Now, why is that? It’s because we don’t want “those people” around the hospital. Except guess what? They’re already there being treated for all kinds of other things.

That’s not right. We have science-based, perfectly reasonable treatment methods that are rather like what therapists are doing anyhow with other kinds of clients. And yet, we’ve somehow come to believe that this is somebody else’s work. We should mainstream it in churches, in healthcare, in psychology, in social work, in homeless services. It’s just a really common part of life and not one to be shunned.

On the importance of “small interventions:”

Most of the things in my career that were most important were unexpected. And I learned early that when you don’t find what you predicted, that’s when you should get interested, become curious, and follow that, believe your data and follow your data.

In 1983, I was thinking of Motivational Interviewing as a kind of priming the pump or getting people ready for what would be real treatment. The unexpected thing that popped up was that after a conversation in this way, people often began changing without additional help.

My training as a therapist had been “the longer you spend with me, the better you’ll get.”  But I began to find that even after a relatively brief conversation, people seemed to turn a corner on what had been very longstanding destructive patterns.  It didn’t make sense to me, but we kept pursuing it. That has held up over time.

If you look at the stories of healing and in writings about Jesus, they’re not long interactions. They are relatively brief encounters. He almost always touches the person, which is interesting. But these things are not long-term psychotherapy sessions. Something is happening that powerfully changes the person.

On the possibility of personal conversions:

Some people don’t know that the author of the hymn Amazing Grace was a slaver. His last trip was not the one on which he wrote Amazing Grace. He had a couple more exchanges. And so, it doesn’t necessarily happen all at once. It’s not always like Ebenezer Scrooge, where you’re totally transformed in the moment.

But sometimes people are. I wrote a book called Quantum Change. The last psychologist I could find who was interested in this was William James, for whom psychology and religion naturally fit together at the beginning of the 20th century.

He was fascinated by people who are suddenly transformed and tells some of their stories in Varieties of Religious Experience.  I wondered, “Is that real? Does that actually happen in real life?” Well, the stories are found in biography and autobiography.  We found that it was not difficult at all to find people who had had such “turning point” experiences in their lives. They hadn’t told anybody. They often didn’t talk about it, because the experiences sometimes sound pretty crazy.

I just went into the study asking, “Does this even exist? Is there such a thing as an experience that happens within a few minutes or hours that permanently changes the person, like a one-way door?” It is real and it’s common.